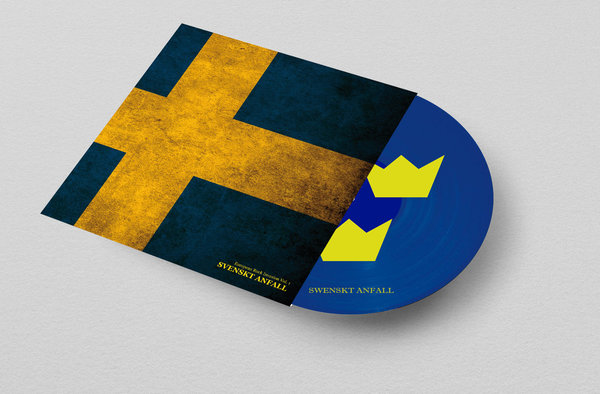 We are ready to launched a new vinyl series: ‚EUROPEAN ROCK INVASION‘. On November 5th the first part Vol. 1 'Swenskt Anfall' will be released.
The basic idea of the series is to bring together great live recordings from the respective participating countries. The releases of the European Rock Invasion series will be released in a limited edition each with an exclusive country-specific sillscreen on the b-Side.

Vol. 1 is dedicated to our friends from SWEDEN with live performances of
TRUCKFIGHTERS performing Atomic from 2014: „The Truckfighters are not only the best band I have ever heard, but the best band that has ever existed," says stoner legend Josh Homme. Actually, a desert rock combo cannot receive greater praise. The band was founded in 2001 by guitarist Niklas "Dango" Källgren and bassist and singer Oskar "Ozo" Cedermalm. In the following years, the line-up changed several times before a permanent line-up was formed in 2007 after the addition of drummer Andre "Poncho" Kvarnström.

SPIRITUAL BEGGARS are represented with two classics: Concrete Horizon and Euphoria, from 2010: The band was formed in Halmstad in the early 1990s by guitarist Michael Amott. Spiritual Beggars released their debut album in 1994, at which time Amott left the band Carcass and arranged for Spiritual Beggars to sign a record deal with Music for Nations. 1996 saw the release of "Another Way to Shine", 1998 "Mantra III" and 2000 "Ad Astra". After that, singer and bassist Spice left the band, as he wanted to concentrate fully on his second project, the Mushroom River Band. He was replaced by Janne "JB" Christoffersson from Grand Magus and bassist Roger Nilsson. After On Fire, the album Demons was released in 2005. Instead of Roger Nilsson, Sharlee D'Angelo can be heard on bass, who also plays with Michael Amott in Arch Enemy.

SIENA ROOT contribute a live version of Mountain II from 2007. Siena Root is a Swedish rock band with its roots in late '60s and '70s rock music. The group was founded in Stockholm in the late '90s. Their sound is based on heavy organ, howling guitars, bass riffing and big drums. It is also often enriched with bluesy soulful vocals, various guest musicians and psychedelic vibes.
The band believes their music has the warm color of Siena, an earthy colour. Because their sound has roots that go deep, they named the band Siena Root.

This is just the beginning of a long journey through rocking Europe. Vol. 2 will follow soon.

A3 Eophoria by Spiritual Beggars (live 2010)