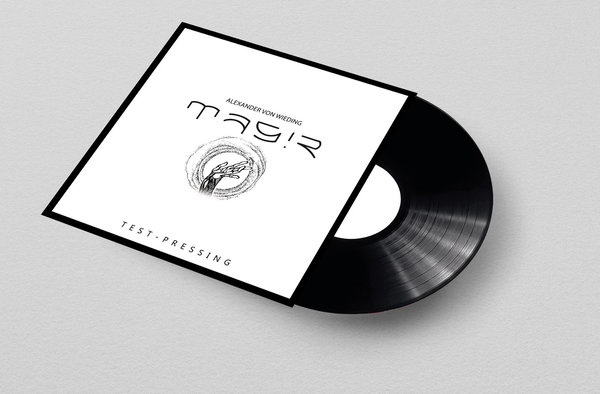 After his one-man-lo-fi-garage-doom-blues alter-ego Larman Clamor, Alexander von Wieding releases his newest musical child into the world. Far from his previous musical orientation, as AvW he explores simpler, almost more intimate paths. With this project, he sets his latest creation, the visionary graphic novel MAGIR, to music.

With synthesizer sounds, which with their minimalist nature are reminiscent of soundtracks from 80s horror films, von Wieding »paints« musically once more. It hums, buzzes, crackles and purrs wonderfully analogue from the speakers. A completely different world opens up here than that previously known from Alexander vonWieding. Partly surprising and partly not - after all, the illustrator and musician‘s versatility in styles is already known and loved.

But »Klangspiel« is more than ‘just a’ soundtrack. Rather, von Wieding’s performance sees itself as a kind of expansion to the image of the graphic novel written and drawn by him. Meditative and seething, »Klangspiel« takes us into the mysterious and transcendental world of MAGIR. The melodies eat their way into the ear canals like a smoldering fire... Comparable to great artists like Rudy Adrian, Steve Moore or Sinoia Caves, von Wieding does not shy away from exploring previously unknown-to-him territories with synthesizer sounds and almost New Age-like music.

Also working wonderfully on its own and as a pure soundtrack, »Klangspiel« unfolds its full potential in combination with the graphic novel »MAGIR - Erstes Buch: Sicht« (»MAGIR - First Book: Sight«) and »Der Wegweiser« (»The Vehgvyzer«), a cryptic commentary on von Wieding’s wordless story. (Both are available with LP and goodies as a special edition bundle or separately from Amazon.) Once again, von Wieding adds another creative and sparkling particle to his creative mosaic. And who knows where the journey will head next ... One thing is clear though: His latest instrumental creation »MAGIR - Klangspiel« is atmosphere at its finest!